0
Product was added to your cart

What would CETA mean for artists?

The Comprehensive Economic and Trade Agreement (CETA), similar to the Transatlantic Trade and Investment Partnership (TTIP) and the European Union–Mercosur agreement, is an EU free trade business agreement that was negotiated in secret between the EU and Canada over five years from 2009 to 2014.

The European Parliament approved the deal in February 2017 and it has since been partially implemented by the EU, while only 15 EU States have ratified the agreement – excluding the Republic of Ireland. There are a number of concerns for workers in these Free Trade Agreements, the Irish Council of Trade Unions correctly highlights an issue from TTIP, which was later rebranded for CETA as Investment Court Systems (ICS):

A core problem with the proposed deal is the Investor State Dispute Settlement (ISDS) which gives private corporations the right to sue governments for financial compensation if they believe their rights have been violated, a right to be invoked when government actions or policy ‘interfere’ with their ability to make a profit. Critically, the company will be enabled to bypass the domestic legal system of the country concerned and take their claim to a private tribunal, effectively a secret court. This is a clear affront to democratic norms and elevates corporations above citizens, in terms of legal rights and access to the judicial system.

The ISDS provision has previously been used (as part of other trade agreements) to overturn legitimate public policy initiatives and has had a ‘chilling effect’ on the introduction of new policies. This was the case in New Zealand where the government dropped plans to introduce plain packaging for cigarettes due to fears of litigation.

The French multinational Veolia also utilised ISDS procedures to bring a case against Egypt, seeking some €82 million compensation, following the government’s decision to raise the monthly minimum wage and introduce other labour reforms.

The push for CETA in Ireland

CETA was due to be ratified in the Dáil after a 55-minute debate in December 2020. The vote has since continued to be postponed as the opposition parties, along with two Green Party TDs, expressed they’d vote against it.

Despite a vote being called on the deal, the Cabinet has still not seen the economic report into the controversial CETA agreement and a Freedom of Information request to see the report has been rejected.

In April 2021, Ireland Canada Business Association (ICBA) chair Chris Collenette threatened, “that the immediate ratification of Ceta is of great importance to the country’s economy — and that not doing so will be detrimental to its post-Covid recovery”.

CETA is due to be brought before the High Court in June 2021, in a challenge to the constitutionality of the trade deal. Many have demanded a referendum before any ratification.

At our first AGM in March 2021, we joined a large number of trade unions and civil rights groups throughout the EU and Canada by committing our organisation to opposing this dangerous trade agreement.

What would it mean for artists?

If public funding, given to artists or arts/culture institutions for example, in any way reduces the profit margin of a private company, that company will be able to sue the state through secret Investment Court Systems (ICS) for interference in their profits.

Not only could this have a massive impact on the willingness of public bodies to fund the arts, but any future statutory workers rights, if interfering with a corporations profit margins, would result in a lawsuit against the state.

A European report found that: Under a comparable treaty, Canada has been sued 37 times, mostly for trying to introducing better environmental regulation. Billions of dollars are currently sought from Canada. In many ways, CETA gives corporations even clearer powers to sue.

Artists who are sole traders themselves, or are hired by local SMEs, will all be forced to compete with the massive petrochemical industries of Canada. Free Trade Agreements typically result in increased job outsourcing, reductions in workers rights and negative environmental impacts.

Alf Hornborg, professor of human ecology at Lund University in Lund, Sweden notes that free trade also leads to a “net transfers of labor time and natural resources between richer and poorer parts of the world.”
https://smallbusiness.chron.com/trade-vs-protectionism-3830.html

There is no mention of the situation for workers in the agreement. Many workplace laws, like health and safety, anti-discrimination and right to organise, will be restricted by the ICS. A 2016 report predicted:

CETA will lead to wage compression, job losses and areduction of the labor income share. By 2023, workers will have foregone average annual earnings increases of €1776 in Canada and between €316 and €1331 in the EU depending on the country.

The European Public Health Alliance (EPHA) have expressed fears for the negative impact CETA can have on healthcare. With particular focus on ICS, the EPHA warned that “lifesaving public health measures which could be affected by CETA’s investment chapter include, among other initiatives, minimum pricing of alcohol, food labelling, air pollution restrictions, chemicals legislation and soda/sugar taxes.” 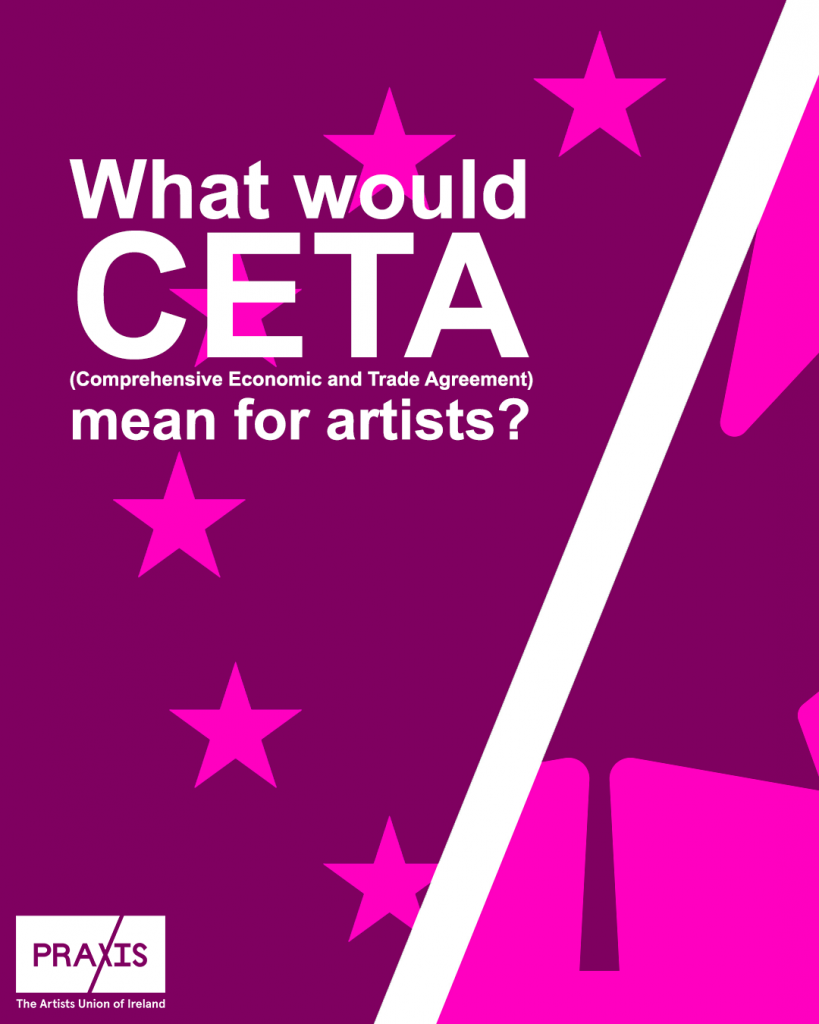 ‘This union states that it is against the Comprehensive Economic Trade Agreement (CETA) between the EU and Canada.

‘CETA is much more than a trade deal and has huge ramifications for workers and their lives. CETA will damage Ireland’s ability to legislate for stronger Workers’ Rights such as compulsory company sick pay/pension schemes. CETA enables private corporations to sue government’s for potential loss of profits as a result of governments changing policy, in private dispute settlement courts ISDS – resulting in detrimental effects on climate action, the housing crisis and more. If passed, the union will work with the variety of other unions and civil organisations who have expressed concerns with CETA and dedicate what time is available to influence public policy on this topic from the perspective of our members’ working conditions.’

We use cookies on our website to give you the most relevant experience by remembering your preferences and repeat visits. By clicking “Accept”, you consent to the use of ALL the cookies.
Cookie settingsACCEPT
Manage consent

This website uses cookies to improve your experience while you navigate through the website. Out of these, the cookies that are categorized as necessary are stored on your browser as they are essential for the working of basic functionalities of the website. We also use third-party cookies that help us analyze and understand how you use this website. These cookies will be stored in your browser only with your consent. You also have the option to opt-out of these cookies. But opting out of some of these cookies may affect your browsing experience.
Necessary Always Enabled

Performance cookies are used to understand and analyze the key performance indexes of the website which helps in delivering a better user experience for the visitors.

Analytical cookies are used to understand how visitors interact with the website. These cookies help provide information on metrics the number of visitors, bounce rate, traffic source, etc.

Advertisement cookies are used to provide visitors with relevant ads and marketing campaigns. These cookies track visitors across websites and collect information to provide customized ads.

Other uncategorized cookies are those that are being analyzed and have not been classified into a category as yet.